Code of silence: Iversen’s “Full Body Burden” is a revelation 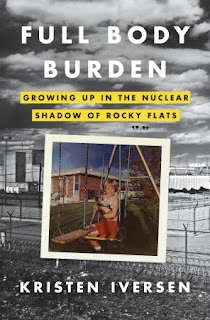 It is very rarely that a complex, decades-long historical tragedy and an intensely personal narrative can be woven together artfully. In “Full Body Burden,” writer, editor, and educator Kristen Iversen does so with a combination of clarity, self-revelation, and readability. That she does so in my critical eye is even more remarkable – as her childhood story is largely my own.

Like her, I grew up in the 1960s and ‘70s in the suburb of , , eight miles southeast (and downwind) from the government’s Rocky Flats nuclear weapons production facility. She writes, “Some of those new suburban homes would have built-in atomic bomb shelters, including a show home in . . . It was one of fifteen ‘Titan’ showcase homes – homes named after the newly developed intercontinental Titan ballistic missile – scattered around the country near other nuclear weapon production sites.”

That was the house I grew up in. The bomb shelter still sits in my mother’s basement, now crowded with cardboard boxes, Christmas decorations, 78 rpm records, and miscellaneous keepsakes. There were a double-handful of government documents stored there, telling us all about how to successfully overcome Armageddon. They formed the basis for my own magazine-length memoir of growing up in the heart of the Cold War (“Growing Up Nuclear," 5280 magazine, April/May 2000).

Iversen’s narrative of course far more comprehensive and inclusive – in fact, it’s the first historical account of Rocky Flats, from its star-spangled start to its ignominious finish, that I found comprehensible. Its convoluted, largely hidden story of secrecy, danger, accidents, Cold War paranoia, and corporate exploitation is riveting in Iversen’s telling. Her research is far-ranging and impeccable.

Rocky Flats manufactured plutonium triggers which would set off the chain reaction inside thermonuclear devices. She describes the urgency and corner-cutting, pushed along by fear of being outgunned by the Russians, that characterized the project from the start. As the years went by, cost overruns, deadly errors, and incidents of contamination were routinely covered up in the name of national security. Iversen aptly delineates all the players – from the technicians and scientists to the bureaucrats to those whose families began to suffer from unexplained cancers in the region to the peace and environmental activists whose increasing clamor finally forced investigation and shutdown of the site.

Iversen, like me, was steeped in the ethos of the time. Most of our neighbors worked at Rocky Flats – high-paying jobs that enabled them to live the suburban dream of affluence and security. None of them could or would tell their children, or us, what they did for a living. “I keep strong,” was one memorable answer I received.

Iversen has the wisdom not to paint one-dimensional pictures of the characters in her story. For a time, circumstances led her to working within the plant itself giving her an irreplaceable perspective. By sharing all points of view with the reader, she quite accurately portrays the zeitgeist of an area in which a “Father Knows Best”-type setting is sustained by an underlying traffic with the deadliest and most morally questionable of dangers.

Speaking of “Father Knows Best,” the other half of Iversen’s narrative consists of discussing her troubled family life. Once again, parallels between her youth and mine abound – our families came from the , our ancestry is Danish, we were raised Lutherans . . . and our fathers were alcoholics.

The symptoms and repercussions of her father’s addiction are almost unbearable for me to read. I can verify their verisimilitude. Like her family, mine coped largely by ignoring the problem (oh, those good old emotionally remote, reality-denying Scandinavian genes!). The shame, anger, sorrow, and guilt she outlines are heartbreaking; and the convolutions of her relationship with her father, with its muddiness and lack of closure, are all too familiar.

The big historical picture and the intimate personal one fuse in a mutually enlightening manner. Beyond my uniquely personal reaction, I think that this book serves as a fundamental resource for anyone trying to understand that particular place and time.

How long will it take until the 6,240 acres on the rolling plains east of the mountains will be safe again? The site has, laughingly, been turned into a wildlife refuge. Many hidden deposits of radioactive waste lurk there; meanwhile, housing developments are springing up everywhere around it, many in the fallout path of past plutonium leaks.

The fallout from a dysfunctional childhood has a big shadow, too. We strive to overcome our own addictive behaviors, try to heal, and pray that we don’t pass the curse on to our own children. Personally, I am very grateful for this book. Isolation is one of the hallmarks of those who grow up in an alcoholic household. Many thanks to Iversen for making me feel a little less alone.