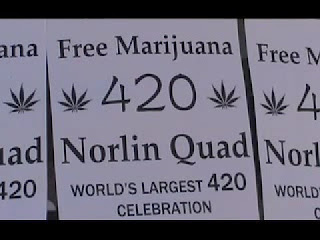 (Note: This commissioned humor piece was judged to be just a little too negative for publication. Let me know what you think.)


Q: How many Boulderites does it take to screw in a light bulb?
A: None – all our citizens know that the true source of light comes from within!
Ah, Boulder. Latte-sipping, granola-munching, Lycra-clad, high-minded Boulder. A recent Gallup poll ranked Boulder No. 1 out of 162 large and medium-sized cities in America for overall well-being.
Bleah.
Our town’s status as a soy milk-slurping, solar-powered Shangri-La is undisputed. Whether you call it the People’s Republic of Boulder, “25 square miles surrounded by reality,” or other such names, our city’s reputation is the same. We are thought of as a bunch of insufferable kooks.
Well, we earned it. Since the 1960’s, our area has served as a magnet for the counterculture. It’s still a home for the counterculture. The institutionalized, affluent counterculture, that is. (Hey, I’m sorry, but if you own more than one car, you’re a Republican.)
Boulder is rife with contradictions. Our prairie-dog population has more legal protections than our homeless humans do. A vast array of regulations confounds anyone here seeking to develop a business or add on to their home. We can’t run around naked on Halloween or bicycle in the buff, but we can take our clothes off at a city council meeting. Our countless absurd resolutions mandating change in the outside world do little to affect change, but add much to our sense of sanctimonious self-satisfaction.
Our hazy, marijuana-scented macramé-and-hot-tub attitudes of yore have hardened into a narcissistic, gluten-free self-righteousness that grates on my contrarian soul. As a friend of mine once memorably said, “I’m sure we would tolerate diversity -- if there was any of it around here.”
With our high standard of living comes a high cost of living, which means that most of those who work here can’t afford to live here. It’s much easier to be happy, and have everyone on the same mental page, when your median family income is $85,807 per year.
Boulder is home for a stilted, studied informality. In few other municipalities is so much money spent on being natural. We go gaga for anything with the labels “green” and “organic” on it, justified or not. Every day, I see people riding bicycles that cost more than I have ever made in a year. And did you know that there are xeriscaping consultants here? That means people pay someone big bucks to tell them to stop watering their lawn.
And the health thing. Folks, not all of us are triathletes, or rock-climb, or mountain bike, or ski, or paraglide. We don’t all shop at the prohibitively expensive health-food supermarkets. We don’t all do tofu. Some of us even, instead of recycling or composting, throw things away -- in the dead of night, so we don’t end up forced to embroider a scarlet “T” on our fair-trade hemp yoga wear.
Are we out of touch with reality? Not if you think that pet acupuncture is a great idea. Not if you have a labyrinth in your basement, or fall for every new therapy that comes down the pike. With high-mindedness comes arrogance, and a loss of touch with common sense.
Even I have to admit an upside, though. For me, self-consciousness is better than no consciousness. Boulder’s aspirations to transcend the mundane, to implement positive change, and to treasure the natural world around it are admirable.
That the problems we have are mostly of our own making stand in sharp contrast to the very real and harrowing problems most of the rest of the world faces every day. We ARE sheltered; we are lucky.
And we are surrounded by beauty. Even after four decades here, I still utter daily gratitude for the nearby mountains I love so much. The winters are pleasant, the summers gorgeous.
There is still an essential undercurrent of kindliness and fair-mindedness at work here, too. I traveled the country in my youth. I saw every place I might be likely to live in – and I came back here. I am raising my children here. That’s an endorsement in itself.
And of course, there’s all the comic fodder a humorist could desire.
Now, the only thing I think we’re missing, really, is the ocean. And the city council’s crafting a resolution about that, I’m told. Namaste, dude.
at May 25, 2010

Can't believe this didn't make it into publication. Wonderful, funny, honest, truth-bearing, scrutinizing, and, yes, balanced (in the end).

The only difference for me is that the blue-sky winters and lovely mountains weren't enough to keep me in the land of fleece jackets and Subarus. You pretty much outlined the reasons this fifth-generation Boulderite left town!

I am a sixth-generation Boulderite ... I too, have chosen to leave the land of fleece jackets and Subarus. But there's a part of my soul that will always be filled with the 'kooki-ness' of Boulder's culture. My Grandparents' blood, sweat and tears helped create Boulder. Of that, I am proud. I will always love Boulder; it's beauty and it's intensity!
I believe people who have chosen to make Boulder their home should be able to appreciate the funny, honest, truth-bearing and balanced thoughts put forth in a publication such as this!

Frankly, my last trips to Boulder have left me convinced it's more of a (slightly) grungy Highlands Ranch than a hippy mecca. You see Greenpeace and dudes in dreads, but they're becoming the minority against the "Do you see me? I am eating Ethnic Food! I recycle!" types I also run into out in "the Ranch."

I'm still perplexed as to why you can puke and piss on the Pearl Street Mall should the mood strike you, but you can't walk a dog there, even if you're carrying poo bags.

A Boulder cop (the very picture of the city's inefficiency) couldn't stop huffing, puffing, and screaming at us despite that we weren't even walking the dog on Pearl Street proper -- just walking the pug from the (still) dog-friendly parking lot and into the LUSH store.

The owner asked me to bring him in, and assured us it was ok to walk him across the bricks of the Pearl Street sidewalk that was considered their property.

What ensued was a delightful match between the LUSH employees, myself, and the cop who was convinced those bricks belonged to Boulder.

Meanwhile, one of the unprotected homeless was throwing up all over. He could have probably used assistance. But nope. Keep screaming about my dogs feet touching that stretch of brick in front of LUSH, though.

Much funnier than your obits on twitter; the ocean would be nice; how old do you have to be here before people stop calling you "Dude"? So, why was this not published?

I do miss channel 8 broadcasting City Counsel meetings especially the 6-8 hour ones... keeping my fleece changed my zip code. (Zip Code man can find me)

From someone who has to commute into, and suffer through, every work day in boulder, thankfully remaining leagues away from being able to afford to live there; I thank you.

That was as dead on a commentary on Boulder! I am not sure why they didn't publish it, but thanks for posting it, as I enjoyed reading it.