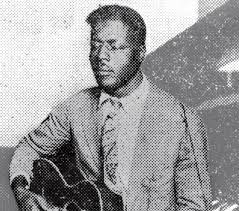 “Dark Was the Night, Cold Was the Ground”

This music sits at the intersection of blues and gospel, and underlines the impulses lying behind both. With wordless vocals, the singer-songwriter lays open his yearning soul to the powers that be, imploring them for relief. It’s a suffering transformed through the power of music to redemption.

Blinded at the age of seven, Willie Johnson (1897-1945) made his living as a street-corner entertainer and itinerant preacher. His music, 30 sides of which he recorded in all, between 1927 and 1930, leaned heavily into religious songs and themes. He crafted many classic iterations of gospel songs such as “Jesus Make Up My Dying Bed,” “If I Had My Way,” and “Keep Your Lamp Trimmed and Burning.”

These “holy blues” tunes he treated with a growl of a baritone voice, and a choogling slide guitar that was played with a knife instead of a bottleneck. His playing is nimble, plaintive, and articulate. On “Dark is the Night,” he spins a slow, meditative rhythm that is hypnotic. His vocals soar and swoop above the strumming.

Johnson’s work became known again through the efforts of Reverend Gary Davis in the 1960s, eventually finding his musical selections covered by all kinds of artists.

The song originated in a 17th-century hymn, “Gethsemane,” which portrayed Christ’s agonies the night before he was crucified. By omitting the lyrics, he turns the melody into an expression of pure, universal feeling.