Howdy! There’s lots of weird stuff in Colorado history, if you only root around in the corners for it. This is an extension of a series I began for Westword, which you can find here, here, here, and here.

The recent unpleasantness has given me a lot of time to go through my files, and I happened upon my old story notes. There are still many, many little-known tidbits from the past still out there, both in plain sight and lost in obscurity. Here are ten more:

Two stone-and-brick pylons bracket Arapahoe Road on the west side of this junction, known as Nine-Mile Corner due to its being nine miles east of Boulder and nine miles south of Longmont. To understand what they’re there for, you have to pull over, get out, and peer around to find a plaque that explains: “In honor of those who served in the World War — Erected by the Lions Club of Boulder 1928.” Natalie Munio reports that the upcoming redevelopment plans for the intersection include preserving and restoring the twin cenotaphs. 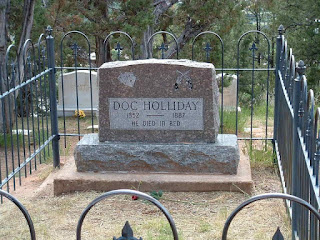 Wait a minute. The final resting place of the Old West gunfighter is a confusing site to see. After a steep but short hike, you find a memorial to John Henry Holliday (1851-1887). And a headstone (evidently the third one, the first two being demolished by vandals/keepsake grabbers) that comments, “He died in bed.” And a disclaimer: “This memorial dedicated to Doc Holliday who is buried someplace in this cemetery.” It seems they lost track of just where they planted him, so be aware that your graveside obsequies might be directed at nothing in particular. 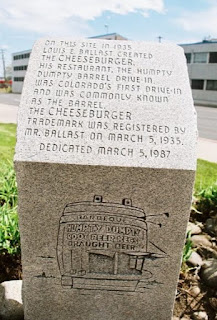 The Humpty Dumpty Barrel drive-in restaurant (Colorado’s first) was where Louis Ballast made culinary history when he topped a hamburger with a slice of American cheese. Oh sure, others have claimed priority — but Louis copyrighted it. A stone marker sits modestly at the original location.

Robert Ford was not known for his wise choices. As a child, he aspired to be an outlaw and idolized the infamous outlaw Jesse James. He joined up with James when he reached the age of 20 (older brother Charles was already in the gang). Soon the two brothers decided to betray James for the substantial reward offered for him, dead or alive. On April 3, 1882, while Jesse was turned away from him, Bob Ford shot Jesse in the back of the head.

The Ford brothers then went to the authorities, and found themselves charged with first-degree murder. They were tried, found guilty, sentenced to death — then pardoned two hours later. When the reward money ran out, Bob made money posing for photos, and starring in a stage show in which he had to reenact the murder, time and again.

Finally, Ford starting opening and operating dance halls and saloons. He set up in Creede on May 29, 1892. Six days later, the whole town burned down. Undeterred, Ford reopened in a tent. Three days later, Edward O’Kelley, armed with a shotgun, entered the place, called out to Ford, and gave him both barrels.

Last but not least, Ford’s body was buried in Creede but later exhumed and moved to Richmond, Missouri. His empty grave is still marked, and visited by tourists. 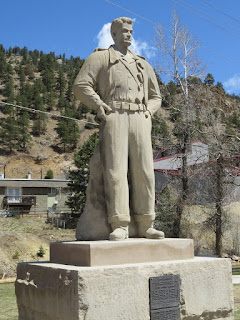 Do you remember Steve Canyon? The great cartoonist Milt Caniff created him after ending his popular adventure comic strip, Terry and the Pirates. Canyon was a smart, tough, independent air-transport ace and veteran who rejoined the Air Force during the Korean War. He fought creeping Communist forces and ideas for 40 years.

Hoping for a publicity-induced business boost, the town of Idaho Springs decided to rename Squirrel Gulch, dubbing it Steve Canyon. They even got the federal government to shell out $12,000 to build a nine-foot-tall limestone statue of the new character. The statue’s plaque reads, “This statue is dedicated to all airmen who wore the uniform of the Armed Forces of the United States in time of conflict, and who stand ready in the Air Force Reserve and Air National Guard to fly in defense of their country, should the need arise” and “The United States Treasury salutes Steve Canyon and, through him, all the American Cartoon Characters who served the nation as salesmen in the Independence Savings Bonds Drive May – July 1950.”

Now Steve Canyon is forgotten by all save the last of the Baby Boomers, but he still stands defiantly, Cold Warrior, hands on hips, facing downhill. 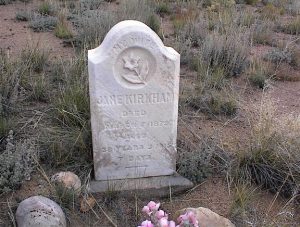 A solitary headstone lies along the path of the old stage road from Leadville to Buena Vista, near the present-day intersection of highways 82 and 24. “My wife — Jane Kirkham — Died March 7, 1879 — Aged 38 years, 3 months, 7 days.” Legend has it that the stage was stopped by a robber, who was shot and killed during the holdup. The robber was purportedly revealed to be a woman, the wife of the sheriff or one of his deputies. Supposedly, it was too embarrassing to bury her back in town. 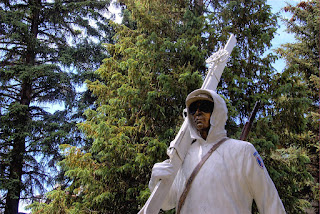 The ski troopers
Vail and Breckenridge

During World War II, the U.S. Army trained soldiers to fight in high altitudes and frozen conditions. Camp Hale near Leadville housed 15,000 men, all trained to ski, climb, and survive and fight in winter. The recruitment and gathering of like-minded soldiers inadvertently led to the explosion of the ski industry directly after the war. Ski-trooper vet Pete Siebert founded Vail, and others followed suit, creating the Colorado ski industry. The statue in Vail is more imposing — 13 feet tall and solemn; in comparison to Breck’s life-size, more dynamic piece. 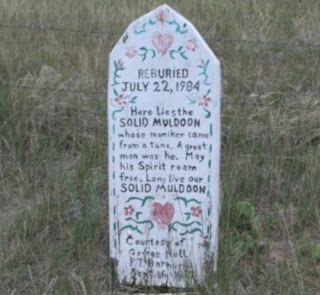 This spot marks the last resting place of a masterful prank. The prankster, George Hull, was a tobacconist from New York. He had experience at fooling people. He had dreamed up the infamous “Cardiff Giant” of 1869, the faked discovery of a carved simulacrum of a petrified prehistoric man. Hull’s trick gulled a lot of folks; P.T. Barnum then made his own Cardiff Giant and declared it to be the real deal, not Hull’s.

Hull wanted to try his trick again. This time, he made a plaster-of-Paris mold instead of a sculpture, bought a real skeleton, and imbedded it, covering it with his creation. The fake was seven feet, six inches tall and featured a small tail, grafted on in attempt to tout it as a missing link. This time Barnum was in on it, fronting Hull $2,000 for 75 percent of the take. Choosing a random Colorado hill, Hull and his cohorts buried the object and a few months later, on September 16, 1877, a shill “discovered” it. Unfortunately, the once-burned public didn’t take to the new hoax, and the Solid Muldoon (dubbed in honor of a contemporary song lyric) soon vanished from sight.

In 1976, commemorants created a replica of the Muldoon and displayed it for a few years. On July 22, 1984, the replica was buried beside the road, near the hill in which the original was interred. 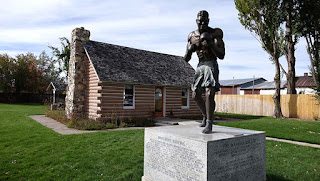 If you’ve ever heard of Manassa, Colorado, it’s because Jack Dempsey was born there (or you’re into covering the yearly migration of sandhill cranes). The champion heavyweight boxer held the title from 1919 to 1926, and was one of the iconic athletes of the era. He started out at the bottom, choosing fights in barrooms and winning them. His boyhood cabin now serves a museum dedicated to his memory; only it and a dynamic statue commemorate this pugilistically talented Coloradan.

Elizabeth Spurgeon (1857-1929) was forced into a life of prostitution at the age of 13 (her nicknamed stemmed from her appearance after a childhood accident). Sixteen years later, she bought a property in Buena Vista, the Palace Manor, and turned it into a whorehouse. In 1897, she married the town plumber and gave up her profession. Their graves were originally bordered by plumber’s pipes.