Gateway Drug: Me and the Kingston Trio 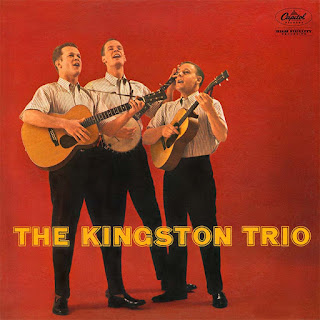 It had to start somewhere.

On January 26, Bob Shane, the last surviving member of the original Kingston Trio folk-singing group, passed away. The event prompted me to pull out my battered and scratched copy of their debut 1958 album, which I’ve hung onto down the years.

Of course, I never have to play it again. I have it memorized. Every song, both sides of the record, in order. I even sing the skips. “Three Jolly Coachmen,” then “Bay of Mexico,” then “Banua” . . . We played it over and over, all three of us kids growing up. We sang along to it, we acted it out. We still discuss it, and surprise each other with snatches from it, sometimes.

This was a huge, heavy stereo console, a real piece of furniture that stood in the living room and held not only a recessed turntable that could play 33 1/3, 45, and 78 rpm records but an AM/FM radio as well!— the multimedia platform of my childhood. I was tested as to my mechanical competence before being allowed to use it. I placed the record on its stacking spindle (you could play as many as four sides in a row), drew the overarm into place, and ratcheted the start control. Magically, the turntable spun, the record clattered onto it, and the tonearm pivoted into place and dropped. Away we went!

There was a warm, thin smell, now lost, of vacuum tubes heating, of thick wires carrying current, a dash of machine oil. The Kingston Trio’s record company, Capitol, had a fun feature incorporated into their LPs (LP stood for “long-playing”) at the time. The labels of the period had the spectrum printed around their edges — a circle that shaded first red, then yellow, green, blue, purple, red again. As the record spun, the label band formed a rainbow. If you stood directly over the record, you could hypnotize yourself as the colors morphed endlessly, around and around. I’m sure that the sight of 4-year-old me staring fixedly into the stereo while singing loudly and lustily along with Bob Shane, Dave Guard, and Nick Reynolds must have been one of the first, but certainly not one of the last, times that my mother must have worried about me.

A word about the musical archeology of my family. On my father’s side, it was conservatism and solid upper-middle-class values, reflected in a love of Bach, Vivaldi, operetta, Gilbert and Sullivan, the slick syrupy sounds of Mantovani, Hugo Winterhalter, Percy Faith et al, and selected musicals, centered on a titanic affection for Rodgers and Hammerstein. Mom’s heritage was more complex. She grew up on gospel and country and western music, which gave her a solid base in Americana.

But she was a closet subversive. She hankered for the simple folk tunes peddled by the likes of Burl Ives, and the politically charged acoustic music of Pete Seeger, the Weavers, and Woody Guthrie. She was a naturally bred fan for the mid-century folk revival, and she and we sang about Darlin’ Corey, and the House of the Rising Sun, that old freight train’s whistle, hard times. Poverty and struggle were romanticized. We were on the side of the have-nots. Our house rang to the sounds of Paul Robeson, Odetta, Peter Paul and Mary, Harry Belafonte . . . and of course the Kingston Trio.

Now this is not to say that we were receiving the pure, authentic, and unvarnished folk gospel. This was cultural colonialism, not just appropriation but pretty much a strip-mining of folk culture. These were not escapees from a prison farm, nor representatives of the underclass. The Kingston Trio and its competitors of the period referred to by Martin Mull as the Great Folk Music Scare — the Limelighters, the Chad Mitchell Trio, the Highwaymen, the New Christy Minstrels, the Highwaymen, the Rooftop Singers, and the Serendipity Singers — were white. Incredibly white. There was a veneer of Caucasian cheesiness that inevitably bleached out the product.

At this time, nightclubs still thrived in profusion, and this was folk arranged, tooled, and produced for middle-class nightclub audiences. It was a fad. For purists, it was revolting. There is casual racism and stereotyping in some of the songs of the Trio and of others. It was a club act. The Trio’s first five albums (we had them all) included show tunes (“They Call the Wind Mariah”) and jazzy ballads (the classic “Scotch and Soda” could easily be a Sinatra song). The nervous and earnest patter between songs that can be heard on their early live albums is obviously the inspiration for the Smothers Brothers’ initial burst of cripplingly funny folk-satire. (Christopher Guest’s 2003 parodic film A Mighty Wind also covers this territory without mercy.)

The whitewashing of vernacular music was common from early days. Minstrel shows were distorted appropriations of black culture. The first jazz ensemble to record, the Original Dixieland Jass Band, was all-white. R & B and early rock hits were Caucasian-ized by the likes of Pat Boone. And thus with the folk songbook. Whereas bards and balladeers such as Guthrie and Seeger made music out of a desire to educate and galvanize, this was merely an impulse to divert, to entertain. The record industry snapped up the folk impulse and homogenized it.

But the music of the Kingston Trio was a gateway drug. It led me on to the real deal — Joan Baez, Tom Paxton, Bob Dylan, and from thence on to the rest of the musical universe. It taught us that music was participatory and open to everyone. You didn't need a concert hall, or professional musicians even. All you had to do was sing.

It also taught me to work my way back through musical history, to find those overlooked original creators of these real and powerful sounds and give them their due, get them on my magical turntable as well. Then, to understand their contexts you begin to read more history, go deeper, and on it goes, keeping the mind humming with music, music all day long. In this way, I think, the commercial folk groups of the era paid penance for their sins of appropriation. I was a white kid stuck in a white town in the very middle of white continent, but this music reached all the way in through and found me and led me out.

And, whether deliberately or not, this inundation radicalized us. In the midst of the Missile Crisis and the Civil Rights movement, most of the songs we grew up hearing (until the British Invasion at least) were either true folk songs, or protest songs, and often both. They were stirring, and their energy swept us up in a wave of optimism. We could sing, and march, and change things for the better, in that magic time before the killings of Kennedys and Kings.

So I slap the records on my turntable again, and sing along with “Tom Dooley” and “Wreck of the ‘John B’” and “South Coast.” Hypnotized again, but this time by the beauty of those voices tumbling over each other, that cascade of beautiful song. And I sing louder.