The NRR Project #52: The first laugh track; or, why is comedy funny? 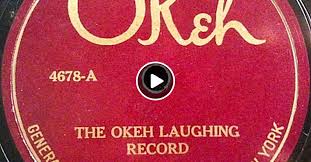 "Comedy is the salt of civilization, its critical voice. The comic spirit is forgiving, stands up for freedom and elasticity, and counters the corrosive powers of evil by refusing to acknowledge its claims over the human spirit. Its real enemy is custom drained of significance; it is the ability of life to assert its claims no matter what social forms dictate." — Guy Davenport

OK, I’m not going to kid you. The best and most comprehensive take on this interesting novelty recording is the analysis and history written by Casey O’Dell for the National Recording Registry, which you can access here. All the vital facts are there, and anything I might add would only be commentary.

Which has never stopped me before.

Boiled down, the facts are these: the original recording is from Germany, recorded on the OKeh label in 1920 — which itself ripped off the idea from Henry Klausen’s recording “The Misfortunes of Youth” in 1903. On the Laughing Record (in German, Das Original Lach Aufnahme), a cornetist tries gamely to play a serious solo, only to be undermined by a giggling, then guffawing, woman. A man joins in the audible hilarity, flummoxing the instrumentalist. At about the two-minute mark, the two laughers finally settle down for a moment, and the horn player makes another game effort. However, this triggers an even more raucous burst of laughter, including snorts, gasps, and sighs, until the comic convulsions peter out.

That’s it. It sold more than a million copies in America. Soon and often copied by other labels around the world, the recording and its like popped up again and again.

O’Dell expertly traces the recording’s history and heritage. He rightly adjudges the subjective experience of listening to the recording as hovering between the “joyous” and “demonic.” O’Dell makes the case for it being a precursor of the laugh track, and talks about our enjoyment of the forbidden and unprofessional live crack-ups of stage and film (or “breaking,” or as the British say, “corpsing”).

He even cites the recording as a proto-meme, and he’s right in the sense that the piece transcends language, making it universally comprehensible and contributing powerfully to its analog-era virality. It’s a great piece of insight.

To it, I can only add some basic thoughts about comedy. Now: nobody wants to talk about why something is funny. Trust me. In my Film Comedy class at NYU, I was forced to read Freud’s Jokes and Their Relation to the Subconscious. Not only wasn’t it compelling reading, but there were no jokes worth cribbing from it. Analysis is death to comedy, which, like horror and erotica, short-circuits a rational response for a welcome burst of feeling, and unmediated response. (To complicate things, we must factor in scholar Eric Griffiths’ statement, “It is important to remember that laughter can express other emotions apart from amusement.”)

Now, Freud thought that comedy provided psychic relief, that it is a safety valve that allows the expression of repressed, forbidden, or social unacceptable ideas. This is also known as the “Hey, I was just kidding” theory, and the reason why comics and satirists are usually the first to be silenced when dictatorships rise.

The ancients proposed that laughter was a way of feeling superior (anyone who has watched the Three Stooges has been exposed to this theory). For them, the clown doing what was “wrong” was a way of reinforcing what society deemed to be “right,” and reinforced adherence to normative values. The incongruous juxtaposition theory, which would also be a great name for an EDM outfit, simply states that humor is triggered when something is out of place or context, or contravenes normal understanding. Surrealist humor such as Magritte’s The Treachery of Images (1929) illustrates the theory aptly. 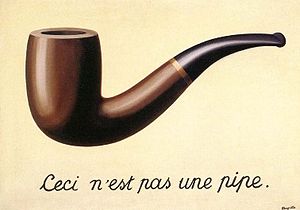 A more recent and more compelling idea has evolved about comedy, to do with the subversion of compassion. The philosopher Henri Bergson declared that laughter required the elevation of the intellect over the sensibilities — that it puts us at a remove that allows us to laugh. We laugh at things that, if presented seriously, would trigger a compassionate response. As Mel Brooks put it, “Tragedy is when I cut my finger. Comedy is when you fall into an open sewer and die.” Thinking of it in this way, comedy takes on tones of sadism.

From a practical standpoint, the perspective of 15 years on stage as a comic taught me that comedy is fueled by a great deal of aggression, sparked by a real grievance about the gap between things as they should be and things as they are. There is an immense pleasure in sublimating this impulse to the service of provoking laughter, and it promotes (temporarily at least) a sense of power and control over the vagaries of human life, a way of both naming what infuriates us and conquering it by laughing at it.

Bergson writes that laughter is inherently complicit; “laugh and the world laughs with you,” as the saying goes. There is an element of coercion to this, but also a spur to inclusivity. After all, if we’re in on the joke, our position is privileged. We become, literally, the cognoscenti, people who know.

The Laughing Record works because it goads us into laughing as well. It gives us a scenario in which we can side with anyone we hear. A musician is attempting to play something straight — to celebrate staying within the boundaries of taste, and the socially acceptable idea of what constitutes entertainment. To the extent that any of us has had to stand up in front of others and perform, our sympathies fly to the struggling cornetist. However, as audience members who have had to sit through insufferable cultural experiences, we side with the laughers as well. Who hasn’t wanted to crack up themselves in such solemn intolerable moments?

There’s no resolution in the recording, no narrative save that which the listener brings to it. Near its end, the cornetist tries to get started again, but he can only blat out a couple of notes, struggling not to laugh himself. And the sense The Laughing Record gives is, that’s OK. Laughter is the solvent of pretension.