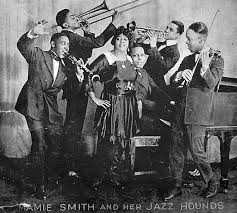 To begin with, the blues were never really just the blues. By the time Mamie Smith recorded “Crazy Blues” in 1920, becoming the first African-American to sing the blues on record, blues concepts and forms had already infiltrated American music. However, her recording sold more than a million copies, sparking a storm of interest and a host of followers, and codifying a genre of music.

Pioneers such as Ma Rainey, while on vaudeville tours at the turn of last century, heard early blues sung by non-professionals and started to pick up the vocabulary, pulse, and feeling of the music. However, when it came to black music, the mainstream taste of the time ran to what were termed “coon” songs – racist and derogatory comedy songs that emphasized stereotyped black behaviors, sung by “coon shouters” (oddly, these were mostly white women, in and out of “blackface” makeup).

Even African-American musical giant W.C. Handy, composer, bandleader, and “father of the blues,” infused elements of ragtime and proto-jazz into his pioneering compositions such as “Memphis Blues” in 1912. That tune was first sung on record by a Caucasian, Morton Harvey, two years later. It was a staid rendition, not “hot” nor deeply felt, delivered as a kind of novelty number. Soon, these pseudo-blues became the province of white female singers such as Nora Bayes and Marion Harris.

Pianist, singer, and composer Perry Bradford convinced Okeh Records’ A&R director Fred Hager to take a chance and record Mamie Smith. She had appeared in Bradford’s 1918 revue Made in Harlem, and she had a strong, clear contralto voice that transferred onto acetate well using the acoustic recording techniques of the day. Despite reported pushback from groups that didn’t like the idea of a black singer making records, Hager went ahead.

Revenue trumped racism. Copies of the record sold by the hundreds of thousands, not just to African-Americans customers but whites as well, rich as well as poor. Here was a genre of music, a sibling of newly-born jazz, which really connected with listeners and exploded into the big time. Soon singers such as Rainey, Bessie Smith, and Alberta Hunter were drawing audiences all across the country. Soon, despite the record industry’s attempt to ghettoize the music by classifying African-American recordings as “race records,” they were welcomed into everyone’s consciousness.

Smith’s accompanists were black, too – Ernest Elliott on clarinet, Leroy Parker on violin, Johnny Dunn on cornet, Walter “Dope” Andrews on trombone, and either Willie “The Lion” Smith or Bradford himself on piano – both men claimed the distinction in later years. “Crazy Blues” is not traditional, straight blues – Bradford artfully interpolated enough variation to make it unique. However, all the elements are there – the repeated phrases, the mournful elegance of the lyrics, and most importantly the undisguised feeling that distinguished the blues from the pallid offerings of the pop hits of the day such as “I’m Forever Blowing Bubbles” and “Whispering.”

The raucous interplay of the instrumentalists are in keeping with the organized chaos of early jazz orchestration, none of it laid out on paper but rather made up on the spot in what were known as “head” or “hum” arrangements. The strong rhythmic sense propels the song, particularly the step-down note sequences between chord changes (that familiar “wah-wah-wah” sound). Dope Andrews’ performance on trombone is a distinctive and delightful feature, using the “tailgate” or “smear” slide technique that allowed the trombonist to flow from one note to the next with ripe abandon.

Smith sings full-out, bending the notes or sidling up to them rather than landing on them with the precision of a conventional vocalist. It’s an urgent, raw sound, one that demands attention. Even though the lyrics are despairing (“I can’t sleep at night/I can’t eat a bite”), there’s something positive and assertive in her delivery that affirms a key part of the blues – the idea that the singer is working through their emotions, purging themselves of the hopelessness that inspired the song in the first place, using the music to come out on top. No wonder people were knocked out by it.

Interestingly, the last verse of “Crazy Blues” is often altered or omitted by singers and scholars. It’s an egregious example of minority-on-minority racism. “I’m gonna do like a Chinaman, go and get some hop/Get myself a gun, and shoot myself a cop,” Smith sings.

Prejudice against Asian immigrants, and Asian-Americans, was just as rife as anti-black sentiment at the time. Anti-“Chinese” riots had been recorded since the 1870s, and the Chinese Exclusion Act of 1882 was on the books. The stereotype of Chinese as pidgin-English-speaking opium addicts who constituted a “Yellow Peril” that consciously sought to destroy Western civilization was entrenched in the culture. Bradford cast his despairing singer into an imagined situation where they could end their misery by bringing on death through killing a police officer, a disturbing projection of a transgressive desire.

Later performers would change the words; on Leon Redbone’s 1977 album Double Time, he artfully slurs and mumbles the offending passage. The lyrics in question are a blemish on an otherwise transformative, landmark composition.