Rockies game review: or, why I’m not a sportswriter 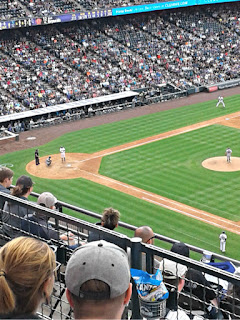 Seattle Mariners @ Colorado Rockies
May 29, 2017
1:10 p.m.
If you’da told me the Rockies were going to be in first place in the National League on Memorial Day this season, I’d have kicked you right near in the viaduct. The Rox have a long tradition of flaming out right after April, and considering the ludicrous amount of injuries we opened the year with, it seemed like now less than ever they deserved another shot from this enthusiastic but gun-shy fan. Our prospects, literally and figuratively, didn’t look good.

I waited ‘til yesterday to go – surprisingly, it was not hard to get tickets. (The previous day’s game was a sellout.) The Bolder Boulder and other holiday activities sucked away some potential crowd members, although a few people with insane stamina, still in their racing bibs, showed up to the game.

It was slightly disheartening, but familiar, to watch the Rockies lose. However (a Rockies fan must always seek qualifiers) there was definitely a different kind of losing going on in this game. This was close. Traditionally, the hit-happy bunch are let down by a series of exploding starting pitchers, who are then replaced by a dreary litany of failed relievers down the years –nay, decades, snatching defeat from the jaws of victory time and again.

Yesterday, our pitchers as a group (we used five, they used seven) suffered from a kind of dreaminess. They seemed to hurl the ball in a state of Borgesian lassitude, as though they were not quite sure any of this was real or not. This caused them to run the count up to 3-0, again and again. Despite the then heroic shakes of their respective heads, pulling them back to consensual reality, and a few strikes thrown, often as not our pitchers were getting pulled with only one or two outs and the bases loaded. You can’t keep this kind of foolishness up for long without getting punished for it. 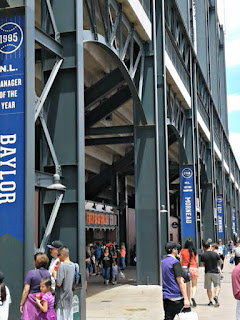 Otherwise, it was a good, clean game, full of swats (17 total hits, 11 runs) and no errors. Time crept by as the pitchers kept changing; the good old Rockies employee who runs gear out from the bullpen when pitchers change and then dashes back, to wild acclamation from the crowd, got worked. It would be easy to cite Parra for his ill-advised steal attempt that killed the 4th as well as some momentum, but it's a standard move. If he'd made it I'd be saying the opposite,so what do I know? In the end the Mariners just did, as Grandpa used to say, more gittin’.

In the stands, we kept our scorecards and cracked wise, one ear on the radio. The usual scoreboard shenanigans kept everyone amused, and there was plenty of hat-doffing and singing and moments of silence for Memorial Day. (What has happened to the interactive magic of the hapless fan out there trying to catch a fly ball, or replacing a base, for prizes, between innings? Is there some kind of liability issue? Has the nnany sstate taken even this away from us?) And, as I predicted, the giant anthropomorphic tooth won the mid-inning race around foul ground, maintaining a lead from the beginning over the anthropomorphic toothbrush and anthropomorphic toothpaste. Not bad.

And, oh yes, when did I predict it would rain? 2 p.m. When did it start raining? Exactly. And who was happy I brought two ponchos? Yes, that is right. Father is right.