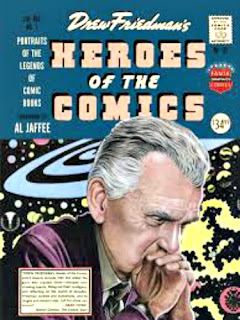 Drew Friedman’s Heroes of the Comics

Drew Friedman has always disturbed the hell out of me. His photorealist-seeming grotesques, studies of minor and marginal celebrities in dark and turgid circumstances, were for me like a flamethrower blast from a terrifying alternate universe – one that lurked beneath our all-too-thin floorboards. In mags like Heavy Metal, MAD, National Lampoon, and RAW he fought for – and won away – my attention from such trifles as big-breasted space maidens.

His new book is a gallery of 83 American comic-book greats that combines the virtues of a portrait gallery and a collection of life stories. These individual portraits in words and pictures, when read together, form an entertaining and neatly comprehensible history of the comics in America.

In rough chronological order, Friedman takes us from Maxwell Gaines, the visionary but short-lived progenitor of EC, through list of the usual Golden and Silver Age suspects such as Jack Kirby, Stan Lee, Eisner and the lot. But he also lavishes attention on the obscure but well-deserved – Mac Raboy, Gardner Fox, Ramona Fraden – all names for the enthusiast to scribble down and add to his or her research list. (Hell, he even throws in Frederic Wertham, whose infamous “Seduction of the Innocent” witch hunt against comics in the 1950s killed a lot of publications and careers).

Friedman had the enormous good fortune to have a father (writer Bruce Jay Friedman) who kept him awash in comics through his childhood, and who knew seemingly everyone in the New York comics scene of the ‘60s and ‘70s. Friedman’s child’s-eye glimpse of the mechanics and business of the industry gives him unparalleled insights – and some great anecdotes – about this lost world, all to be found in his entertaining introduction.

Fantagraphics’ respect for the image gives Friedman’s work a large format, printed on high-quality paper stock. The artists, writers, and publishers are shown in humble situ – posed at drawing desks, cradling cigarettes, in photo-based illustrations. As Friedman puts it, these pictures are “ . . . neither idealized nor romanticized, but depicting the years of dedication etched into their faces.”

This book succeeds as a reference work, an aesthetic object in itself, and a good time – a trifecta that all good non-fiction storytellers would do well to shoot for. “Drew Friedman’s Heroes of the Comics” is an essential tool for understanding how comics became what they are.