Super Mario: America’s greatest tenor and the seductions of schmaltz 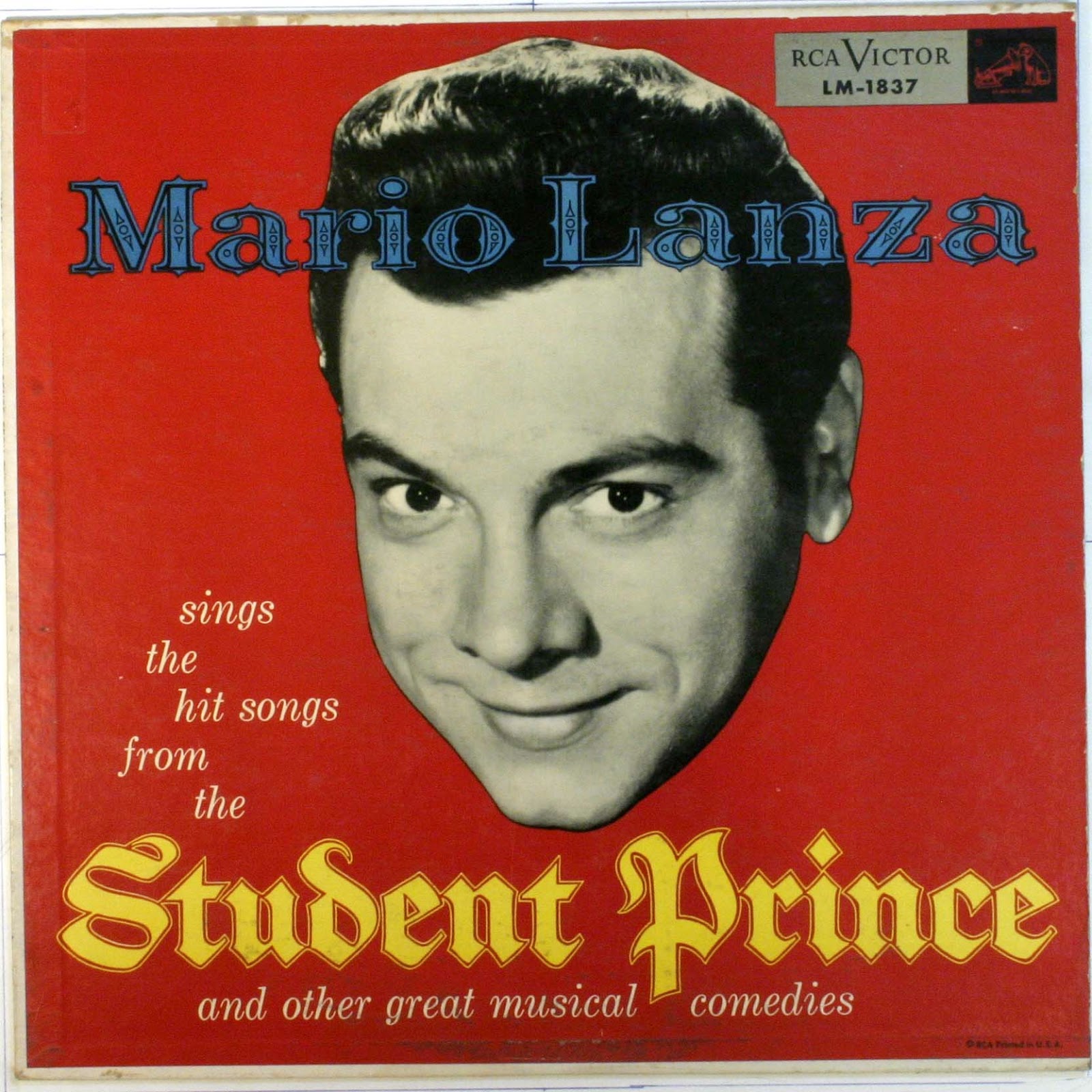 “ . . . the house had been hit in a raid, and among the losses was my record collection, all save one, which I still have . . . I daren’t play it much; it creates such vivid memories. I have to go for a walk; even then it’s about three hours before I can settle down again.” Spike Milligan, Adolf Hitler: My Part in His Downfall

Sitting in my head for decades is a root musical memory of the vinyl disc RCA Victor LM-1837. It’s got the ungainly title of “Mario Lanza sings the hit songs from The Student Prince and other musical comedies.” On the album’s cover there floats Mario’s big, ripe, grinning head, cut out and set against a blood-red background. Inside, a flood tide of rich phrasing and incredible vocal pyrotechnics. My father, an operetta aficionado, played it all the time. My mother, normally allergic to this kind of thing, shared an affection for it with him. They had been carting it around all their married life. By the time we kids got to it the vinyl was scratched and pitted with affectionate use.

Why was Lanza so important to both of them? What did he mean to them?

Now, in 1940, big bands were riding high. The Swing Era was inaugurated by Benny Goodman’s breakthrough concert in Los Angeles’s Palomar Ballroom in 1935. Ten years later, it was over. Many factors contributed – the drafting of many musicians in World War II, the crippling ASCAP strike of 1942-1944, and most importantly the phenomenal explosion of interest in Frank Sinatra, who went from being one of Tommy Dorsey’s juvenile singers to a number-one sensation. Suddenly, instead of a vocalist serving as one component in the ensemble, he or she was pushed into the spotlight. Song choices and musical arrangements were now shaped around a vocalist’s range and persona.

Into this setting stepped the ambitious 26-year-old Lanza. His slowly developing career took off after his performance at the Hollywood Bowl on August 28, 1947. The 4,000 in attendance included many people from the film industry, including MGM mogul Louis B. Mayer. Mayer quickly signed Lanza to a contract. Three films later – “That Midnight Kiss,” “The Toast of New Orleans,” and “The Great Caruso” – he was the first to sell a million copies of an operatic recording, 1951’s “Great Caruso” soundtrack, one that has never gone out of print. 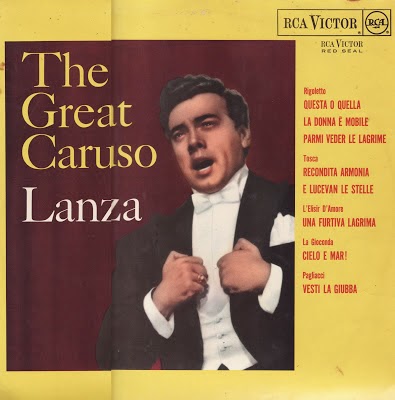 Then he eased out of the onerous pressures of Hollywood, trained himself to an exemplary degree, and became a long-lived and beloved opera star, the greatest tenor of the 20th century.

Of course, this did not happen. In fact, this is precisely the opposite of what happened, and that flicked the switch on the tragic nimbus that still hovers behind Lanza’s memory. The singer, the only child of a passive, shell-shocked WWI veteran and a domineering, frustrated-musician mother, was spoiled as a child. His lack of discipline and impulse control as an adult, mated to childish willfulness, led to a lifetime of self-destructive behavior.

Lanza seemed bipolar, swinging abruptly between extravagant spending, womanizing, and boasts that he was greater than Caruso, and long periods of crippling stage fright, depression, isolation, paranoia, and compulsive bouts of eating and drinking. (He repeatedly went on sometimes-successful crash diets to reduce his weight for filming – yo-yoing between 180 and nearly 300 pounds.) He would sabotage his voice by singing loudly all night before a concert – then cancel the concert due to a sore throat. (Like Pavarotti, he was famously called out for lip-synching in public; his sloppy erotic divertissements with Judy Garland and others are on record.) In the end, he stormed and strutted like the stereotype of the preening Italian tenor.

MGM announced that Mario Lanza would play the lead in Sigmund Romberg’s “The Student Prince” in 1951. However, this marked the point at which Lanza’s diva-esque behavior would drive the studio to suspend him, cancel the film, and sue him for damages. After pre-recording his songs for the film shortly before his conflicts with the studio became unworkable, Lanza found himself frozen out of the production. Finally, Lanza submitted to the ultimate insult – his vocal tracks would be lip-synched by a slimmer and more cooperative actor, Edward Purdom. The authorities finally divorced Lanza's wonderful voice from his troublesome self.

The movie was released two years after Lanza’s recording sessions. By that time, he had made one more film in the U.S., “Serenade,” and would be off to Italy, from where he would not return alive.

Lanza was possessed of the finest natural tenor voice many have ever heard. It is full, ringing, clear and expressive. When Lanza was focused and disciplined, his breath control, diction, tone, interpretive skill, and sense of dynamics was unsurpassed. However, when in distress or out of shape, these abilities would lapse and audiences would hear some of the qualities complained about by many critics – a forced, metallic quality, pushing for effect, poor breath support, and an impulse to constantly go for “toppers” – stunning bursts of  volume and flashy high notes, whether the material warranted it or not.

Being an overnight sensation meant that Lanza was pushed into recording lots of forgettable pop. However, while his health permitted his versatility and sensitivity to the material meant that he recorded many fine interpretations of ballads. Too, his renditions of many romantic and lyrical canzone Napoletana (Neapolitan songs) are considered definitive.

Lanza’s voice is so compelling and penetrating, he sings with such commitment and intensity, that it is difficult to be unmoved. Tied in with the conventions of the day – heavily orchestrated accompaniment, echo, stereo reprocessing – the result is super-extravagant schmaltz of the highest pitch. It’s a collision of the high-art operatic and the lowbrow, sentimental mush of the time.

Success destroyed Lanza. The money, fame, and adulation sudden film stardom brought were just as addictive as the women he chased and the booze he poured into himself. To his handlers, Lanza was a machine that printed money. Very few of the people who did business with or for him had any regard for his sanity or long-term career. Studio heads, music producers, managers, agents, lawyers – he quickly grew a protective carapace around himself -- one that required massive amounts of income to sustain. It was in no one’s interest to say no to him.

So, if Lanza’s life was a tragedy, whose fault was it? It depends on which biographer you read. Six different biographies range in their depictions of Lanza from a suffering saint to a contemptible cur. Some are clearly written for gain, retailing Lanza’s flaws to sell books. These include books in which the authors felt no compunction about making up reams of imaginary dialogue, as well as the inner thoughts of its subject and everyone around him.

Another pushes the myth that the Mafia killed Lanza. In fact, Lanza’s self-indulgent lifestyle weakened his heart considerably and contributed to the phlebitis that killed when a blood clot left his leg and migrated to his heart, causing a fatal heart attack.

One reliable source is Armando Cesari’s “Mario Lanza: An American Tragedy,” which includes a painstaking list of his recordings, films, concert, and radio appearances as well as a Cesari-curated CD of rare live and home-recorded tracks that bolster his extensive, solid analyses of the singer’s changing voice.

Roland L. Bessette’s “Mario Lanza: Tenor in Exile” is its equal. Bessette is painfully honest about many embarrassing incidents in Lanza’s life, but balances them with equally affecting stories of his kindness and his bouts of professionalism. At book’s end, Bessette speculates that Lanza’s inherent character flaws would have prevented him from having other than the life he did. “He had . . . the best career he could have had.” All who examine his life declare his voice a natural talent so immense that it crushed the man who had to bear it.

This is where my parents come in. My father, raised in a comfortable middle-class household, was heir to a taste for light classical music and operetta, from Gilbert and Sullivan through Herbert, Friml, Lehar, and the rest of those composers of tuneful pleasantry from the turn of last century. My mother, out on the farm, had no such musical pretensions, and grew up on country music and white (aka unswinging) gospel. But she was quite imaginative, well-read and had a flair for the dramatic – thanks to her, we had a well-stocked assortment of musical comedy soundtracks.

Somehow, Lanza hit the sweet spot for both of them. It served as a sort of soundtrack to their courtship. Later, it became a humorous and affectionate reference for them. Much later, it became something no one wanted to hear around the house. It had become an unbearable reminder of a romance that played out into a marriage overwhelmed by alienation and despair.

“The Student Prince” is powered by a classic romance plot: he’s a student prince, she’s a barmaid . . . complications ensue.

We kids played Side One over and over, crooning and swooping about the house, making melodramatic gestures of cross-eyed devotion in jerry-built costumes we thought mimicked the elegant finery of the principals. There was nothing more exhilarating than to imagine that I might one day be as captivating as Mario, with a magnetic voice that no one woman could resist!

“Overhead, the moon is beaming
White as blossoms on the bough
Nothing is heard but the song of a bird
Filling all the air with dreaming
Could this beauty last forever?
I would ask for nothing more, believe me
Let this night but live forever, forever and ever more!”

Lanza’s sound penetrates the thick, warm orchestrations, creating a kind of gem-scattered brilliance on a velvety background.  It’s not hard to see how Lanza and his music became a metaphor for the world of unattainable, disturbing fantasy the protagonists of Peter Jackson’s film “Heavenly Creatures” seek. For a while, it was our fantasy world as well.

Likewise, after years of contemplating my parents’ emotional dynamic, and sometimes overcoming its shadow on my own relationships, I have to come to a conclusion parallel to Bessette’s concerning Lanza  – they had the best marriage they could have had.

As for me, to the extent that I grew up thinking that love was supposed to be one long operatic epiphany . . . well, life took care of that. I spent many years chasing that addictive love high. Complications ensued. Now on much more solid ground, I can finally detach myself from all the regretful associations and really hear that voice for what it is.

And there, distilled in those romantic melodies, is still a kernel of what drew my parents together. Whether it was illusory, or never meant to last, those songs embody a majestic passion that must have consumed them, once. It’s comforting to know that.