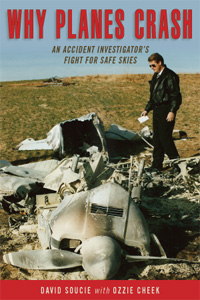 Why Planes Crash: An Accident Investigator’s Fight for Safe Skies
By David Soucie with Ozzie Cheek
221 pgs., Skyhorse Publishing
Straight out, I need to make an admission – I went to high school with the author. No pressure, right?
I have been reviewing books, and a vast variety of work in other media, for two decades now. When I found out that a former classmate had written a book, I requested a copy from him, without his prior solicitation. I was insatiably curious.
My nervousness about the possibility of reading something awful, and having to pan the work of a nice guy, was groundless. “Why Planes Crash” stands on its own merits, a thoroughly enjoyable a thought-provoking read.
It succeeds on many levels. First, it’s an engaging autobiography, outlining the author’s personal and professional progress and pitfalls as he moves from aircraft mechanic to maintenance director to FAA inspector and beyond. The number of alternately hilarious, horrifying and moving moments he has experienced in his career alone makes fascinating reading.
A key factor in this level of satisfaction is the tone of the book. It’s an old cliché that you should write as you speak, with a directness and sense of comfort that draws in the reader. It’s also absolutely true, and damnably difficult to pull off. Years of artifice, bad habits and self-consciousness usually have to be stripped away before a writer’s voice can truly be heard. Fortunately, with the aid of Ozzie Cheek, Soucie accomplishes this. In fact, it’s a special treat to read this book from my unique perspective as, having known him for 30-odd (or 30 odd) years, I can attest that it sounds like Dave is talking directly to me.

It doesn't hurt that the pervasive crusading thrust of the narrative is often punctuated by a number of acknowledgments of his own shortcomings -- his workaholic nature, his headstrong tendencies, and a shattering admission of his valuing the bottom line over life that he feels led to the death of a coworker.
Second, it offers a no-holds-barred look at the real-life practices behind airline safety – a system that, despite the presence of many good people and positive practices, is frighteningly prey to the same problems and lapses any other line of work is. Bureaucratic inertia, political infighting, personal vendettas, corporate collusion and governmental red tape all seem to stand in the way of a very basic public obligation – to make sure that people don’t get killed in the course of a flight. It’s easy to agree with Soucie’s assertion that he was edged out of the FAA due to his impertinent insistence on honoring this responsibility.
Thirdly and most importantly, he describes an evolution in his thinking that, articulated and spread properly, can prove of great value and application in all walks of life. His sense of integrity does not allow him to accept half-measures, and he eloquently gathers together strands of realization along the way, weaving them into a theory of prognosis and information sharing that can be used to prevent disasters, rather than merely the passive application of blame – and new rules -- after the fact.
I have seen the need for this kind of thinking, time and again, in every organization I have been a part of, and at the heart of many of the problems and tragedies I have reported on in my career as a journalist. Soucie traces each step, from literal nuts-and-bolt practicalities to philosophical stance, with elegant clarity.
In the end, what raises “Why Planes Crash” above the level of the as-told-to and tell-all piece of non-fiction is the soul behind it. Soucie comes from a place of caring. He has principles, and he manifests them in a real-world, high-stakes area of concern to all. "Why Planes Crash" offers new ideas and insights in the context of solid storytelling. Thanks, Dave.
P.S.: At the end of his book, he threatens to write a follow-up that will articulate his concepts more thoroughly. Get cracking, mister.
at November 14, 2011