Who was Norman Corwin? The beauty of radio drama 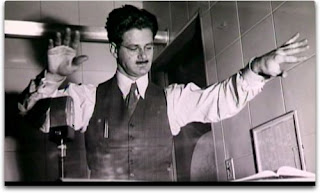 Seventy years ago, Norman Corwin was one of the most celebrated voices in America. Ten years after that, the medium he made his name in was extinct.

The world of radio as mainstream entertainment for America lasted only from 1926 to 1962. It dominated the public consciousness, employed thousands, and broadcast millions of hours of drama, comedy, music, news, kids' shows, quiz shows and more. It anticipated all the genres found on TV and trained most fo that industry's first generation of talent. Television killed it -- although radio persists as a creative medium in many other countries, it died a quick death here.

Although radio spawned a recognizable flood of stars -- Jack Benny, Gene Autry, Jack Webb, William Conrad, George Burns, Orson Welles -- the list of writers, directors and producers behind them is often overlooked. Corwin was the most significant and one of the most skilled of them all.

Unlike other major but forgotten figures such as Himan Brown, Arch Oboler, Elliott Lewis, William Spier, Gertrude Berg, Carlton E. Morse, Norman MacDonnell, Edward R. Murrow, Stan Freberg, Anne Hummert, Paul Rhymer, Irna Phillips, Lucille Fletcher and Don Quinn, Corwin became a household name because of his quick facility with language and the broad, sentimental, affirmative canvases he often painted. He started off as a reporter (excellent training for churning out words without the luxury of writer's block), moved on to reading news and creating original work for stations in Boston. His talent soon brought him to the network level at CBS, where he was given carte blanche to deliver such inventive limited series as "Norman Corwin's Words without Music," "26 by Corwin," "Columbia Presents Corwin" and others.

He was a booster of American ideals, and articulate so well and so vividly that he became the de facto voice of the nation for a time. "We Hold These Truths," broadcast over all major networks on December 15, 1941, told a shell-shocked nation just what it was fighting for. "On a Note of Triumph" four years later celebrated victory over the Nazis.

He could work in many genres, as is proved by radio plays such as "The Plot to Overthrow Christmas," "They Fly Through the Air with the Greatest of Ease," "The Undecided Molecule," and perhaps his best work, "Document A/777," which outlined the adoption of the Universal Declaration of Human Rights by the United Nations.

After radio's heyday, he kept on writing -- for film, TV and print. He taught journalism for decades at USC. Late in life, he produced a spate of dramatic broadcasts for National Public Radio, proving the continued viability of the medium.

American commercial radio was by and large for its 36 years an immature art form, trapped in genre conventions and unable to tackle many controversial subjects. It was on the cusp of developing into something complex, grown-up and cutting-edge when it went silent. Corwin reveled in the freedom of sound, the intimacy it imparted to the listener, its imaginative scope. Working with a handful of pages and some microphones, sound effects personnel, musicians and persuasive performers could create a world, stimulate the ear and provoke minds.

Due to a family fondness for "old-time" radio, I was steeped in the programs as a child. The first pieces I wrote were scripts for radio. The first big successes of my career were delivered to the ear. I wound up in front of a microphone, off and on, for years. Even though it's still perceived as a marginal and antiquated means of expression, I would still drop everything for a chance to work in it again.

A lot of the thanks for this gift of hearing the beauty of radio and yearning to fulfill its still untapped potential goes to Mr. Corwin. Moreover, he believed in truth, liberty, equality, justice and compassion -- what we used to call principles and now think of as mere slogans. He wasn't afraid to be corny, to wax rhapsodic, to champion thoughts that the cynical disdain. By doing so, he gives people like me permission to keep those principles alive and discussed. For this, much thanks.

Email ThisBlogThis!Share to TwitterShare to FacebookShare to Pinterest
Labels: radio