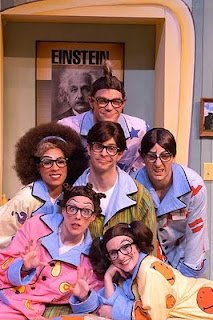 There are two kinds of parents in the world – those who have never heard the songs of “Schoolhouse Rock,” and those who can’t get them out of their heads.

Thanks to the excellent current production of “Schoolhouse Rock Live” at the Arvada Center for the Performing Arts, we can all get on the same page.

Under the inventive direction of Kitty Skillman Hilsabeck, the sextet of performers give literal life and bounce to the material developed by TV producer Tom Yohe beginning in 1973.

Thanks to great writing and performances by people such as Bob Dorough, Blossom Dearie, Jack Sheldon and Lynn Ahrens, the bite-sized series of animated songs that covered topics such as math, science, grammar, American history, economics and more are indelible. My wife can sing the Preamble to the Constitution thanks to the show, and I believe that if you turn a figure 8 on its side it’s a symbol meaning infinity. And one of my offspring thinks that there is some Kabbalistic profundity about the song “Three is a Magic Number.”

The stage adaptation finds a clever framework within which to place the action. A young, nervous teacher, Tom (Seth Caikowski) finds himself surrounded by an ensemble of alter egos that lead him through the material he plans to address to his class – Schoolhouse Rock style, of course.

The five avatars of Tom (Amanda Earls as Sparky, Ashlie-Amber Harris as Whynona, Matt LaFontaine as Coolroy, Daniel Langhoff as Mathu and Julia Perrotta as Hap) exhibit great singing voices, bold physicalization, and cheery stamina. This is a fast-moving, high-energy show, and no one drops a beat throughout.

The result is fun for the kids, who will love the loopy set, costume and makeup designs as well – and nostalgic for we who drove them there and know each one by heart. I almost held up my lighter at the end. I was trying to get them out for an encore of “Interplanet Janet.”