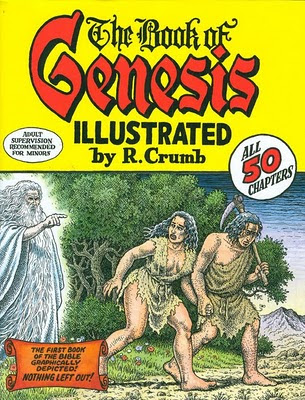 How do you draw God’s picture?

Famous underground illustrator R. Crumb took a marvelous, gutsy stab at the question on Oct. 19, when “The Book of Genesis Illustrated by R. Crumb” hit the bookshelves. His antic style is channeled into a gruelingly faithful 224 pages. Murder, incest, power struggles, family fights, and betrayals – it’s all graphically rendered.

The results are subversive and affirming at the same time. Subversive because they dodge none of the text’s ugly incidents or confusing lurches of tone and doctrine. 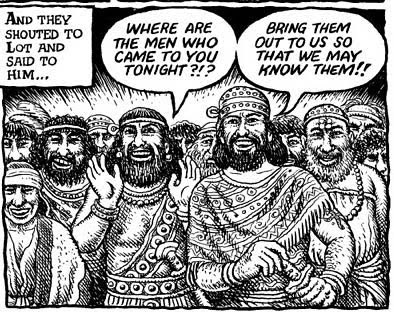 Even the boring stretches, those long lists of begats, are transformed into strings of absorbing, carefully wrought portrait cameos. Affirming because it takes the document seriously. Of course, any depiction is a de facto interpretation of the text, but Crumb doesn’t go for laughs or satirical comments, nor does he posit an alternative interpretation of it. 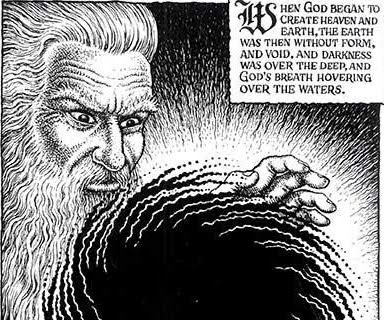 After so many decades of being categorized as a countercultural artist, Crumb’s impulse to portray one of Western civilization’s founding sacred texts is understandable. Although he first found fame as a rebellious figure, Crumb’s work as a whole ranges far more widely. In tackling Adam and Eve and all that follows, he follows centuries of tradition, from the Book of Kells down to today.

The power of the graven image cuts both ways. Prohibitions against and mistrust of images is strong in monotheistic cultures. The word “iconoclast” means “image breaker”; it stems from a struggle over the use of images in Christian Byzantium in medieval times. During the Reformation, too, statues, images and altars were shattered, torn apart or burned. 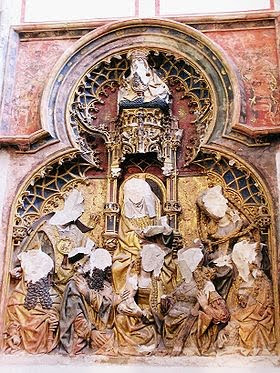 Statues at the cathedral of St. Martin in Utrecht, the Netherlands, damaged by Reformation iconoclasts.

Islam has long frowned on images as well. During the three-day 1977 Hanafi Siege in Washington, D.C. 12 members of an Islamic extremist group took 149 people hostage, and killed two. One of the incident’s causes was its leader’s opposition to the pending release of Moustapha Akkad’s “Mohammad, Messenger of God,” aka “The Messenger,” a feature film about the founder of Islam.


(Ironically, in the film the prophet was never shown, and his speech never heard, in accordance with the strictures of the Hadith.) In 2005, the Jyllands-Posten Muhammad cartoon controversy led to the deaths of over 100 worldwide.

Yet the Bible, like most other religious texts, is a bottomless font of visual inspiration – and, particularly in Christian history, the use of visual storytelling aids, such as murals, paintings, panels, stained-glass windows . . . and illustrated Bibles.

The fundamental artist for me in this tradition is French illustrator Gustave Dore (1832-1883). The huge, impossibly heavy Bible in my grandparents’ home was tempting to pore through not because of the crabbed, unreadable Fraktur typeface verses but because of the staggering visions of the artist, whose engraving abilities are historically unmatched. 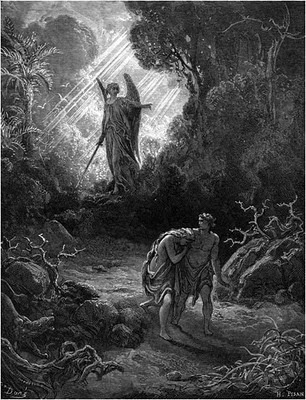 The tormented physicality of Dore’s figures and the fantastic landscapes in which they coil and stretch are endlessly fascinating, and they drew me into the words behind the pictures. As intended. 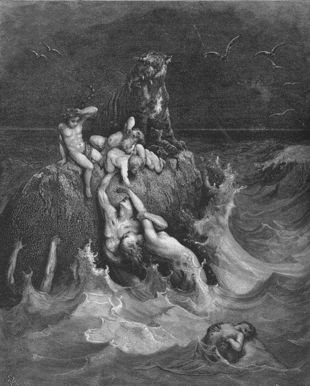 Another publication that still floats around my subconscious is “Picture Stories from the Bible,” a 1943 work by the enterprising Education Comics. 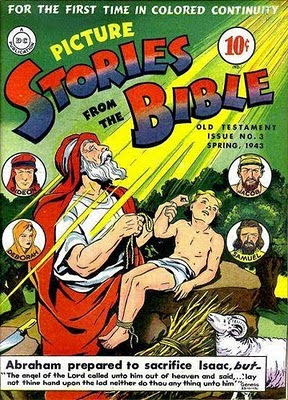 It was created under the direction of Maxwell Gaines, nee Maxwell Ginsburg, who created the size and look of the comic book itself in 1933.

Gaines’ All-American Comics launched the careers of the Flash, Wonder Woman, Hawkman and the Green Lantern characters. He broke away and started EC with only the “Bible” material, and began diversifying before his sudden death in 1947. (Son Bill is best known for his creation of such sci fi/horror/war/humor comics classics as Tales from the Crypt, Frontline Combat and Mad magazine.)

For all of Gaines’ faith (no pun intended) in the material, “Picture Stories” is a severely neutered and distorted version of the goings-on in the Good Book. The six-panel page standard is rarely swerved from, and all the drawings by Don Cameron are functional, the strip equivalent of a movie made entirely out of medium shots. A brilliant visual analysis of the still-in-print work can be found here, penned by Kristy Valenti at Comixology.

God manifests himself as a sunburst or cloud of speech, delineated with all capitals, with squiggly text, as though the Deity was equipped with a mighty sub-woofer to go with his Mister Microphone. 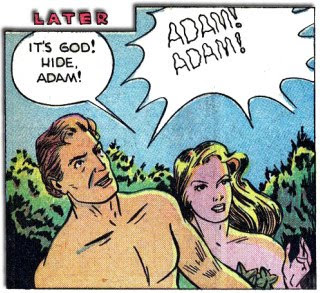 All the women characters are dressed in standard-issue Hollywood B-movie Arabic gowns, all with eyeshadow and perfect perms, even immediately after giving birth. 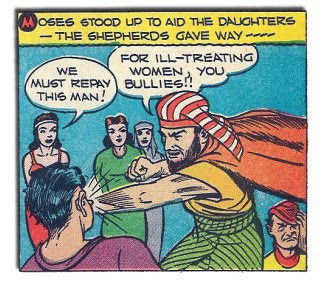 The men are interchangeable, the action is non-stop, with many of the stories streamlined and condensed under the heading of the main character involved – the editor’s revenge at last on the unwieldy original! (The back cover, studded with cameos of Bible heroes, is paraphrased entertainingly in Crumb’s version.) 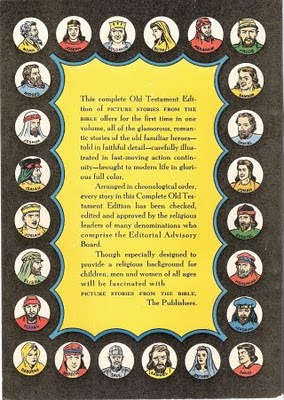 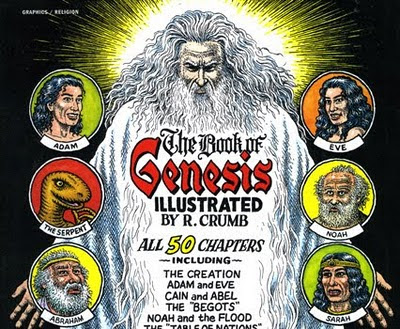 No one gets it on in “Picture Stories.” We don’t get to read about Noah’s drunkenness, Lot’s incest with his daughters. Ruth busts in on Boaz when he’s in bed – and, well, she tucks him in. “Rest well, Boaz, I shall lie at your feet all the night!” she chirps. No wonder we needed sex education in schools.

After Dore’s elegant lines and Gaines’s brash, brightly colored freemaking, everything else seems tame. Mass-produced evangelical publications tend to toe the aesthetic and doctrinal line. A mantle of propriety puts the kibosh on close, hard visual depictions, leading to lots and lots of sanitized kitsch. Much is forgiven in the name of faith. 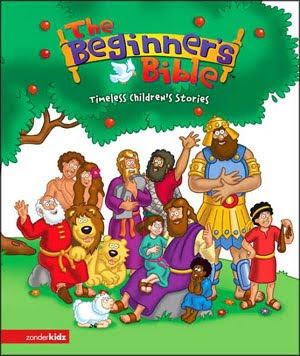 Only exceptions such as the harsh, crude figurations found in the Chick Publications gospel cartoon tracts – those nifty little pamphlets you find in the men’s room in bus stations, tucked in random books in the library, gracing some fried chicken joint in the middle of nowhere. 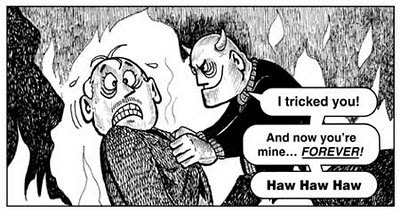 The past 50 years have seen secular culture knock Biblical conceits from their pedestals. If we absorbed any spiritual information from the Judeo-Christian tradition, it was probably in the form of a comedy routine like Bill Cosby’s “Noah” trilogy from his first album:


Flip Wilson’s “David and Goliath” routine, and film comedies such as “The Life of Brian” and the much less funny comedy “Wholly Moses!”.


A standout independent film from 2003, “The Real Old Testament,” goes for the vernacular with a rendition of most of Genesis in the style of a TV reality show, complete with pull-out interviews, a strong dose of improvisation, and a reliance on the overturning of strongly branded, stock conceptions of the Bible as literature.


And now, we even have the Bible illustrated with Legos! The Brick Testament boasts that it is "the world's largest, most comprehensive illustrated Bible." It's pretty nifty. 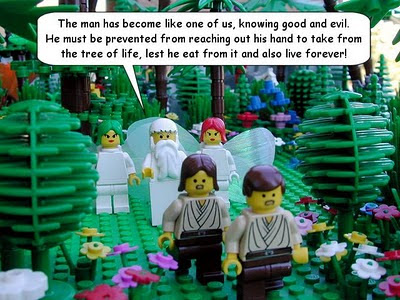 Crumb’s innovation comes in facing his material head-on, engaging in extensive research and thought. Unyoked from organized religion’s concerns, or the compulsion to mock, he finds what is powerful and sacred by showing us real people and real feeling, warts and all.

Most importantly, he makes those confounding passages clear. Some might argue that forbidding, bumpy roads such as Crumb’s Genesis can also lead us to God.
at January 15, 2010