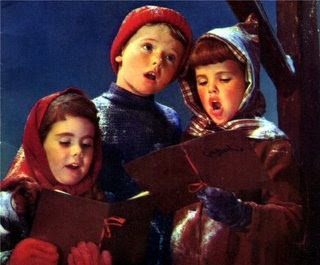 Gosh, there’s nothing like hearing Christmas music in every store and on every street corner. It really puts me in the mood – to buy a high-powered rifle and start shooting into crowds from above.

The onslaught now starts as soon as the last trick-or-treater rings the bell on Halloween. We start cranking “Jingle Bells,” “O Little Town of Bethlehem” and the rest.

Over and over. Incessantly. Until I begin to poke absentmindedly at my eardrums with an awl.

Christmas music is too much of a good thing. Our frighteningly cheesy high school show choir used to hit the road during the holiday season, chirping holiday tunes at old folks’ homes, in shopping malls and even door to door.

But caroling’s kind of like sports, and sex. It’s fun to participate. Not watch. Not so much.

The categories of holiday music, in increasing order of annoyance, are as follows:

It’s almost always not in English, so you can pretend they’re singing whatever you like. Many times, under Christmas duress, my fellow baritones and I whispered filthy variants of our own back and forth while performing the good old Weihnachtsoratorium.

When not captivated by something on the order of Luigi Melanoma and the St. Cajetan Rejects doing “I Spumoni Contenti,” I can listen to stuff like Handel’s “Messiah” on perpetual repeat, no problem. My favorite chorus? “O We Like Sheep,” also the state anthem of Wyoming.

As a bonus, it makes you sleepy. Who doesn’t love falling asleep under the tree face down as the spilled eggnog begins to crust and stink in the shag carpet while the Robert Shaw Chorale belts out “Adeste Fideles”?

2. Hymns, carols and other semi-sacred fare

It doesn’t get much whiter than this. It’s not syncopated, it doesn’t swing, it’s melodic, harmonic, and nearly catatonic. 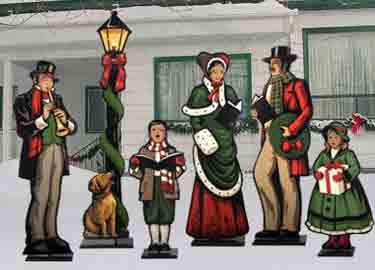 Now it starts to get dicey. In this case, we all know the words, and if we cannot get behind the whole Jesus-baby concept, it can be uncomfortable singing along.

Even though Xmas is all about love and hope and kindness, some of the songs still manage to twist the guilt-knife. “God rest ye merry gentlemen/Let nothing you dismay/Remember Christ our Savior was born on Christmas Day/To save us all from Satan’s power/When we had gone astray.” Ouch. In “O Holy Night,” we discover that “Long lay the world/In sin and error pining.” Well, thanks.

And there are some I’m still puzzling on. Isn’t the “The Holly and the Ivy” quite a metaphoric stretch? “I Saw Three Ships”? “Good King Wenceslas”? Not a clue.

You can still count me in for a few verses of “We three kings of Orient are/Trying to light a rubber cigar…” But don’t get me started on “The Little Drummer Boy” or “Do You Hear What I Hear?” These are my bête noires. Do not sing them, or I will hurt you.

OK, here we enter a strictly undoctrinaire zone. This is all about Santa, and Rudolph, and Frosty, and that jazz. Getting’ stuff, and busy streets, and snow-covered lanes, and ornaments! Yay!

It seems that every songwriter saved his or her catchiest tunes to wed to holiday songs, and these ingrained melodies haunt us, throbbing in our skulls even during our August noons. At Yuletide, the saturation is total. The sugary avalanche floods our ears. It’s like being choked to death with licorice whips.

Some songs are great, and stand up on their own merits. Mel Torme and Bob Wells’ “The Christmas Song”

would sound great covered by Monk. “White Christmas” is a killer. But the rest – c’mon, it’s a racket.

None of America’s pop Christmas songs predate 1934. The image of Santa was standardized by illustrator Haddon Sundblom for the Coca-Cola Company in 1931. Hmmm. 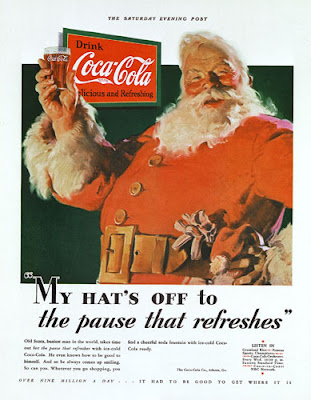 Sense a pattern there? The 20th century’s commercialization of Christmas is a magic wave of capitalist ethos that still swells and sweeps the world. It needs a syrupy soundtrack.

What were originally supposed to be relief from the season’s solemnities became nasty nuggets of noise themselves. “Jingle Bell” barking dogs, “Grandma Got Run over by a Reindeer,” “I Want a Hippopotamus for Christmas,” any parody . . . stop, please. Just STOP.

Any song where you’re using Christmas as an excuse to get laid is just not right. “Let It Snow,” “Baby, It’s Cold Outside,” “Merry Christmas Darling” – all pathetic attempts to get into someone’s pants. Take it from me, it usually doesn’t work. Also, it gives me horrible flashbacks about Andy Williams Christmas specials that are the mental equivalent of shingles.

Take “The Carol of the Bells.” Add “Sleigh Ride.” Add “March of the Wooden Soldiers.” Add every other song mentioned so far. Put a beat on it. Homogenize. Spray it liberally into every corner of reality.

Then book me a room at the clinic. Wake me when it’s Mardi Gras. Now THERE’S some good holiday music.