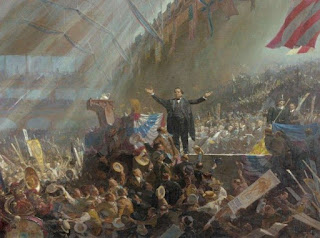 William Jennings Bryan was known as “The Great Commoner,” but it is more apt to think of him as America’s first great demagogue. He was the ultimate orator, with a booming voice, expressive body, and a mellifluous approach to speechwriting that swept listeners into a rapt state, and sometimes rapture itself. He could command a crowd, but not the electorate — he ran for president three times, and lost each time.

Fate deigned to make him an early success. At the politically young age of 36, he reached his zenith in the American consciousness on July 9, 1896 at the Democratic convention in Chicago — his celebrated “Cross of Gold” speech.

Robert Cherny’s essay on the speech is invaluable for making clear the then-burning issue of the “gold standard” versus the “free silver” factions in U.S. politics. In essence, big business and the moneyed interests, what Teddy Roosevelt was soon to term “the trusts,” preferred the low prices caused by accepting only gold as legal tender. Meanwhile, the farmers of the country, still a substantial majority, wanted the coinage of silver in order to ease the debts they could not pay due to lower prices for their goods.

“The Boy Orator of the Platte” was a champion of the people (something disputed by historians such as Irving Stone, who considered him a fatuous blowhard). Devoutly religious, he had a Messianic sense about him that was quite compelling. The Democratic Convention was made for his purposes.

The speech itself was a mishmash of invective, sentiment, and rhetoric, much of it audience-tested in prior speeches for maximum effect. “The humblest citizen in the land when clad in the armor of a righteous cause is stronger than all the whole hosts of error that they can bring. I come to speak to you in defense of a cause as holy as the cause of liberty — the cause of humanity.” He excoriated the “Atlantic coast” (aka big business) and apotheosized the common man — 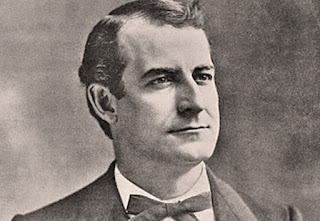 “Ah. my friends, we say not one word against those who live upon the Atlantic Coast; but those hardy pioneers who braved all the dangers of the wilderness, who have made the desert to blossom as the rose—those pioneers away out there, rearing their children near to nature’s heart, where they can mingle their voices with the voices of the birds—out there where they have erected schoolhouses for the education of their children and churches where they praise their Creator, and the cemeteries where sleep the ashes of their dead—are as deserving of the consideration of this party as any people in this country.

“It is for these that we speak. We do not come as aggressors. Our war is not a war of conquest. We are fighting in the defense of our homes, our families, and posterity. We have petitioned, and our petitions have been scorned. We have entreated, and our entreaties have been disregarded. We have begged, and they have mocked when our calamity came.

“We beg no longer; we entreat no more; we petition no more. We defy them!”

He aligned himself with populism, that great uprising at the end of the 19th century that pitted the farmers and the labor movement against bank, railroads, monopolies, and the bigwigs of high finance. This progressive and socially responsible outline of action would be co-opted by the major parties and become a significant thread in American political thinking.

“You come to us and tell us that the great cities are in favor of the gold standard. I tell you that the great cities rest upon these broad and fertile prairies. Burn down your cities and leave our farms, and your cities will spring up again as if by magic. But destroy our farms and the grass will grow in the streets of every city in the country.”

Finally, Bryan wound up with a killer finish. Gesturing dramatically, he concluded with, “. . . you shall not press down upon the brow of labor this crown of thorns. You shall not crucify mankind upon a cross of gold.”

The convention went wild, applauding and parading Bryan on their shoulders for 25 minutes. “The Silver Knight of the West” won his party’s nomination, but lost to McKinley.

Bryan was a large political figure, but never an effective leader. He was a great candidate (he invented the election strategy of canvassing the country, speechmaking incessantly as he went to rally his supporters) but he was destined to be an ever-more-marginal player. Finally, he wound up as a kind of “fundamentalist pope” (according to H.L. Mencken) who fought the teaching of science in schools, most notably in connection with the Scopes trial of 1925.

Still, he articulated the feelings of a large mass of the American public. More than that, he worked a kind of rhetorical magic. In the days before media’s rise (in fact, this recording is a 1921 recreation by Bryan of his epic speech), the compelling individual had to prove their mettle live, in public, in front of hundreds or thousands. This kind of magnetism can only be hinted at in Bryan’s recorded commemoration.