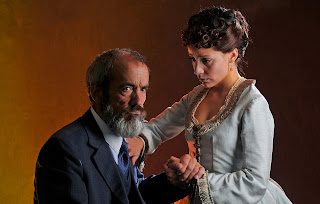 John Hutton as Lear and Jamie Ann Romero as Cordelia in the Colorado Shakespeare Festival's production of "King Lear." (Photo by Casey A. Cass/Courtesy CU Communications)

Oh, those crazy Lears. The cops have been out to their place five times this week. When are these people going to stop being reality-show fodder?

Evidently, not until they and their friends, in-laws, and employees have been locked out of the house, tied up like parcel post, blinded, driven insane, stabbed, hung, poisoned, prevented from attempted suicide and/or suffered hypothermia.

In “King Lear,” this onslaught of mayhem represents the end of a world – when the bonds between parents and children, siblings, husbands and wives, all dissolve and the brute drive for dominance takes over. Unfortunately, the Colorado Shakespeare Festival’s new production doesn’t take that big but necessary step of uniting macrocosm and microcosm. The result is not profoundly moving tragedy, but the mere spectacle of one family’s melodrama.

As such, it works just fine, and as is par for the CSF course, you can get a good solid introduction to the work by sitting there and watching it go by. You just can’t get moved by it, or gain insight from it.

You can’t lay this larger lack on the actors – they do their best. Technically, too, the lighting and sound design, scenic and costume elements all support a clear, cohesive concept. It’s not a matter of scale, either. You don’t need troops of extras to give “Lear” an epic sense – you just need an epic sensibility.

Setting it at the end of the period of America’s Old West seems arbitrary, though. It’s a nice change from the usual royal drag, but at times I had the uneasy feeling I was watching an old episode of “Bonanza.” (Lear as a Western has been tackled, to a degree, in Anthony Mann’s great 1955 movie “The Man from Laramie,” and more explicitly in the 2002 made-for-cable film “King of Texas,” and utilizes the same blinding-with-a-branding-iron for Gloucester.)

The actors, by and large, keep their heads above water. John Hutton, a brilliant actor and long-time company member at the Denver Center Theatre Company, tackles the central role with gusto and insight. His work just keeps getting better and better, and here he plays Lear as only he could play it – with intensity instead of bluster and vulnerability instead of pathos. Other familiar and welcome faces from past CSF productions include Karen Slack as Regan, Jamie Ann Romero as Cordelia and Bob Buckley as Gloucester.

CSF vet Stephen Weitz makes for an admirable Fool, even though he is put through some off-putting paces – including hanging himself in full view of the audience at some random point in the interminable second half of the show. I’m sure he’s just fine personally, but on stage at least he’s simply not well-hung.

Geoffrey Kent brings his genial affability to the role of the usurping Edmund: in fact, he’s so personable that I really didn’t mind that he outlawed his goody-two-shoes brother, betrayed his father, and boinked all the ladies. His incredibly good fight-direction skills help things considerably as well.

So, go to see Hutton and the rest fight to fill the empty space. Hutton is too honest an actor to play Lear as a scenery-chewing coot, and as the run continues perhaps he and his castmates can imbue the show with the sense of urgency and momentousness that it needs.

“King Lear” is presented by the Colorado Shakespeare Festival through Aug. 8 at the Mary Rippon Outdoor Theater on the CU-Boulder campus. For tickets and complete information, please call the box office at 303-492-0554 or visit www.coloradoshakes.org.
at July 06, 2010